On Sunday, March 10, my wife, son, and I went for a short hike throughout Corcoran Woods and Sandy Point State Park.

We first parked in the little parking lot on Tidings Road and took a quick look inside the fenced Corcoran Woods. To our dismay, this area was extremely flooded and most of the trails, known as Fire Roads, were un-walkable. We strolled through the trees using the middle trail where a small pond has made a permanent home. This was the first time that my wife and son had seen this property which I have often spoken of. We kept an eye out, but we spotted no deer.

Then, we turned around and left the fenced area to go back to the gravel parking lot. From there, we headed down the trail that led into Sandy Point State Park. The three of us were surprised when we startled a group of three deer who were bedded down in the brush.

While hiking this trail for a short time, you must cross a small residential road. The walk took a lot longer than my last visit because of the mostly flooded paths. It was quite deep, which was surprising in contrast to the paths just two months ago. It took some creative thinking to make our way around the water, on and over downed trees and through thick growth. After we crossed the aforementioned road, we entered Sandy Point State Park and visited a few interesting sites. For example, there was a small, mysterious pavilion right off the path. Despite looking abandoned by the park, there were still wooden markings near the site indicating it was, in fact, not neglected. It was hard to guess what the backstory of this structure is, but I hope to find out soon.

Finally, we turned around and headed back to our vehicle. Even though we spent only an hour in the woods, it was good to be out and about in the Maryland outdoors. 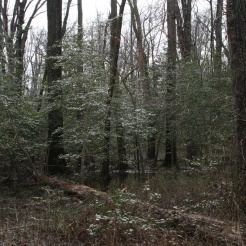 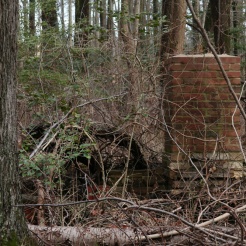 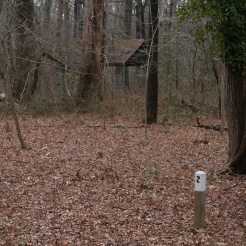